Revisiting the ASUS U30Jc with an SSD

Our standard laptop reviews always look at the systems as they come from the manufacturer. However, we know many people will perform some upgrades at home to improve certain performance aspects. One of the easiest to perform is an upgrade to the hard drive, specifically removing the old style conventional hard drive and replacing it with a state-of-the-art SSD. We already had a good laptop with the ASUS U30Jc, but what happens when we perform just such an upgrade? That's what we're looking at today.

We've had plenty of coverage of SSDs, so we won't dwell too much on why you might want one or which models are the fastest here. The short story is that hard drives are very slow compared to other modern components. That's why we have lots of main memory in modern systems, and even memory isn't all that fast which is why we have L1, L2, and L3 caches. Where modern processors can theoretically consume several hundred gigabytes of data each second, keeping the engines fed is quite a challenge. Unfortunately, hard drive performance hasn't been keeping pace with the rest of the computer ecosystem, and when you're stuck waiting for a hard drive to load your OS or applications your shiny new computer can end up feeling like a dog.

A good desktop hard drive might be able to deliver 100MB of data per second (several orders of magnitude less data than what a CPU can process). The SATA interface is now able to move up to 600MB/s, but actually saturating even a 300MB/s SATA bus is quite a challenge with conventional hard drives. Where things get particularly ugly is when a drive has to perform seek operations to find the data you're after; with each seek taking 12 to 20ms on average (depending on the drive and rotational speed), random access patterns are the bane of the hard drive. Instead of pushing 100MB/s, with random data hard drives will often drop to under 1MB/s. Ouch.

Of course, SSDs aren't without their drawbacks. The chief complaints are price and capacity. Where you can find a 500GB 7200RPM 2.5" laptop hard drive for as little as $85, and 1TB 5200RPM drives are now available for $170, even the smallest SSDs—at least the ones worth buying—start at $80 for 32GB. In terms of price per GB, SSDs generally cost around 15X—or more!—as much as conventional hard drives. The catch, of course, is that they can be an order of magnitude (or two) faster, depending on what you're doing. Another complaint involves reliability, both short-term and long-term. Some SSDs have been around long enough that we're fairly comfortable recommending them, but there are still far more instances of bricked (re: broken) SSDs, particularly with some of the latest models. Staying on top of firmware updates can be critical, and having a good backup strategy is highly recommended—but then we'd recommend backing up data for HDDs as well. 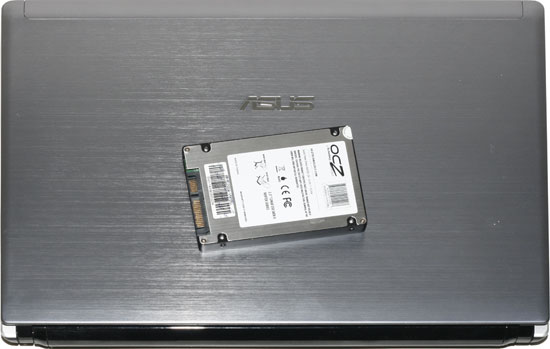 For this particular test, we didn't have a huge selection of SSDs available. Anand has plenty of SSD reviews in the works, but we turned to an older, well-regarded model: the OCZ Vertex 120GB. If you're wondering about pricing, this particular model will set you back around $325. Sporting an Indilinx Barefoot controller, the Vertex was the first SSD that was a reasonable alternative to the Intel SSDs—it was a bit slower in random read/write performance, but it provided faster sequential transfer rates and an at the time lower price per GB. There are faster SSDs, but the OCZ Vertex is still a reasonable choice. Here's a recap of our test laptop, this time with the 120GB Vertex.

With the SSD, the total cost of our test laptop is now up to $1225, and there's the rub: we increased the price by around 33% and there are situations where the faster SSD won't make a noticeable difference. Gaming performance? Not to spoil the benchmarks, but the vast majority of games only load slightly faster and frame rates are essentially unchanged. CPU intensive tasks like 3D rendering and video encoding also show little to no benefit, as expected. However, in terms of overall responsiveness, a good SSD can make your laptop feel much faster—especially if you're going from a slow 5400RPM laptop drive. We'll look at some tests where the SSD definitely helps, along with battery life, gaming, and our other standard application benchmarks.