A year ago whenever I'd request an SSD for review I'd usually get a 128GB drive built using 3x nm 4GB 2-bit MLC NAND die. These days the standard review capacity is twice that as most drives ship with 25nm NAND, using 8GB die. Seeing a bunch of scores for 240GB+ drives however is frustrating to all involved. At these capacities you're almost always looking at two die per NAND device, which has significant performance benefits due to interleaving. Most SSD controllers have eight NAND channels and with sixteen NAND deviecs with two die per device that's four NAND die that the controller can interleave access between for each channel. The 128GB drives by comparison halve the number of NAND, which only allows the controller to interleave requests among two die.

How read interleaving works on a single channel

Not only are these 240GB+ drives the best case performance you'd see from a particular SSD, they are also very expensive. At around $2/GB you're looking at over $500 for a high end 240GB+ SSD. I've spent the past few weeks gathering modern SSDs with 128GB of NAND on-board to provide a look at a more balanced point in the price/capacity spectrum.

The first drive in the roundup is the one I've had the longest: Corsair's P3. 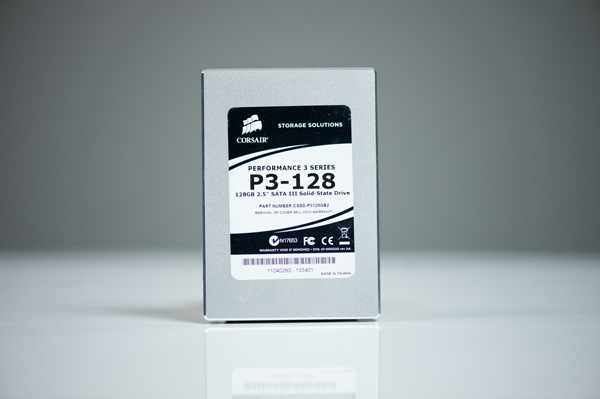 The P3 is based on the same Marvell controller used by Crucial in the C300 and Intel's SSD 510, however it's using what appears to be Marvell's standard firmware and as of yet Corsair hasn't provided any firmware updates to the drive. Internally the P3 uses 32nm Toshiba NAND on a very small PCB: 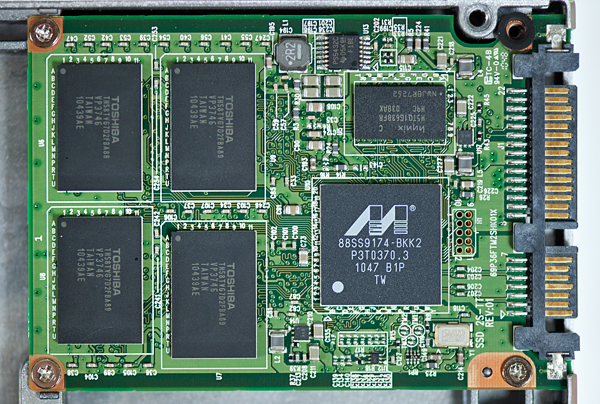 There are 8 NAND devices, making this a fully populated controller. Each NAND device has four 32nm die internally: 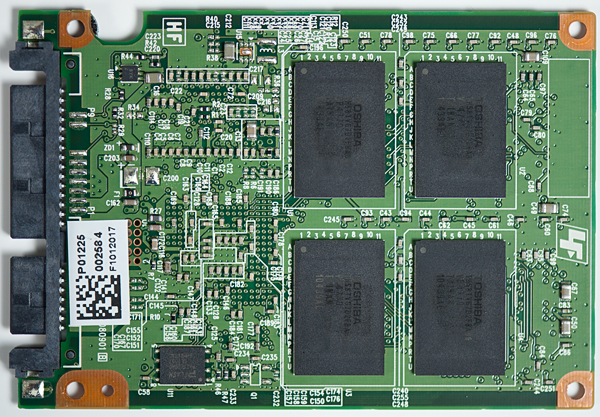 At $229.99 the P3-128 is the most affordable drive in our roundup, and it's a 6Gbps drive so it should be able to post some pretty high sequential numbers.

The C300 is nothing new, we reviewed this drive last year. I still don't have a 128GB version of the updated m4, however as we discovered in our review of the 256GB m4, performance isn't necessarily better than the C300. In many cases the m4 is actually slower than the C300.

With sixteen NAND devices on the PCB, each package has two 4GB die inside it. 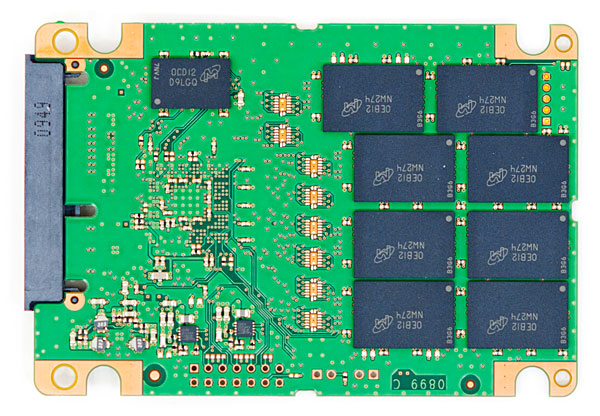 Based on Intel's X25-M G2 controller but with new firmware the 320 adds features like real time encryption, however 6Gbps isn't in the cards with this drive: 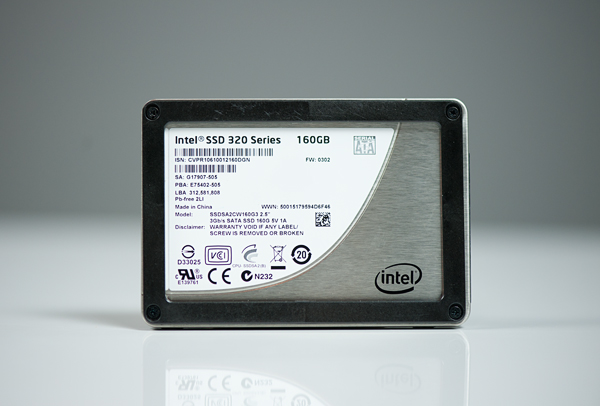 Intel sent along the 160GB version of the 320, which has a pretty unusual NAND configuration. Remember Intel's controller is a 10-channel architecture and on the front of the PCB we have ten 25nm NAND devices: 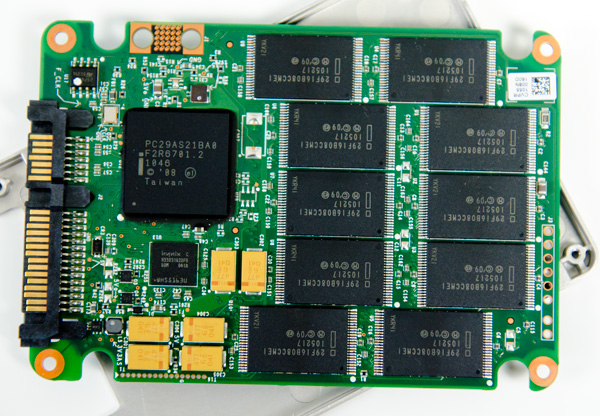 These are 16GB NAND devices (two 8GB NAND die per package). That alone is good for the 160GB drive capacity, but the 320 needs more spare area than its predecessor so 160GB won't cut it. Flip the PCB over and you see two 8GB NAND devices: 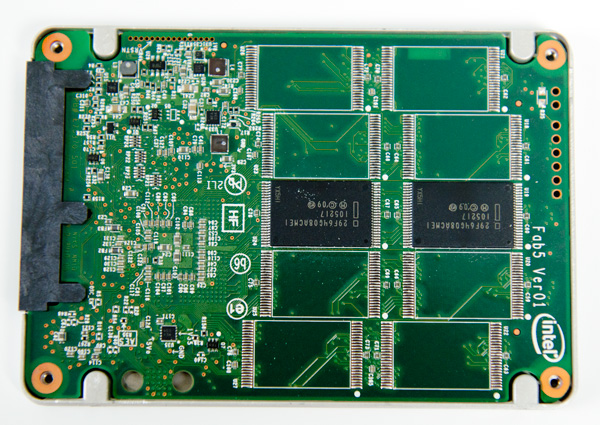 I'm not entirely sure how Intel is striping data across all of the NAND. It's likely that Intel is simply just interleaving more operations on two of the channels. The 160GB 320 is the most expensive drive here at $304.99, but that's mostly because of the drive's capacity. In terms of cost per GB, the 320 is middle of the road here at $1.906 per GB.

While the 320 is Intel's mainstream drive, the 510 is the high performance 6Gbps offering for enthusiasts. Intel is using Marvell's 6Gbps controller, again with its own custom firmware. The drive uses Intel's 34nm NAND and doesn't support the encryption features of the 320. 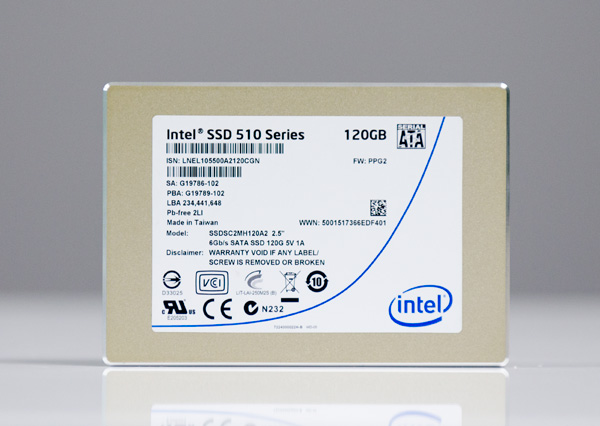 Since it uses 34nm NAND, Intel has 16 NAND devices internally each with two 4GB die: 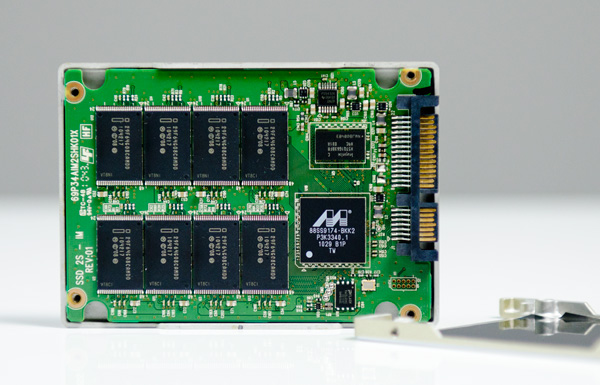 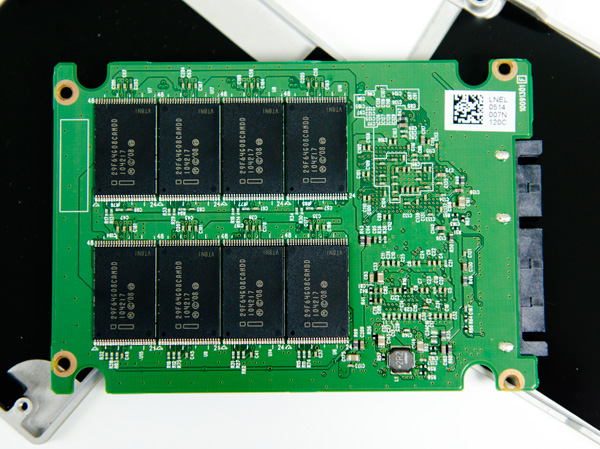 OCZ was the first to ship a SF-2281 based drive and now there are multiple offerings in the OCZ lineup. The Vertex 3 uses 25nm IMFT synchronous NAND, while the Agility 3 uses 25nm IMFT asynchronous NAND. As I hinted at in our review of the 240GB Agility 3, I fully expect a lot of pricing fluctuation between these two lines depending on availability of NAND. As a result, today you can buy a Vertex 3 from Newegg for less than you can an Agility 3. Obviously at the same price the Vertex 3 is the recommended drive but I expect to see these two flip flop more in the future. 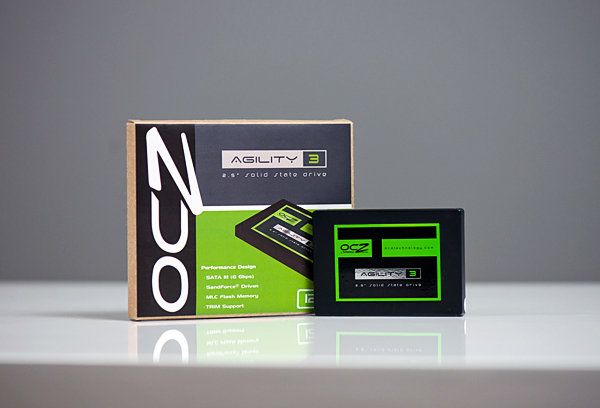 Internally the Agility 3 (and Vertex 3) use 16 NAND devices with one die per device: 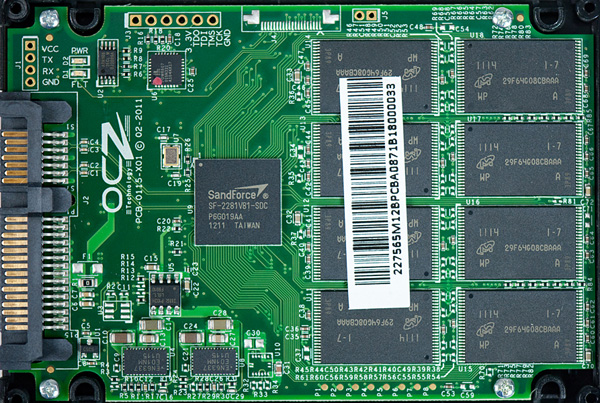 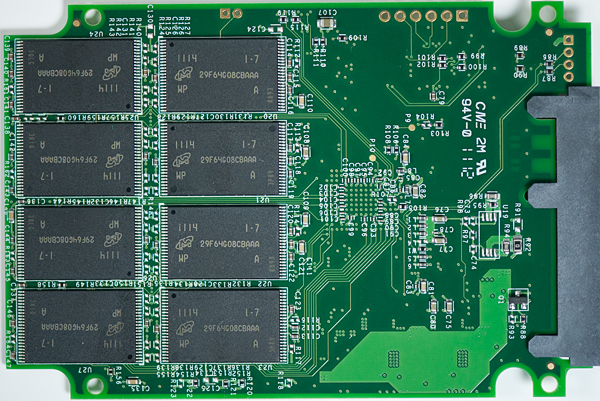