Iomega / LenovoEMC launched an updated version of the LifeLine OS for their NAS devices last week. The new release (v 4.0) will be compatible with the existing StorCenter ix and px series devices in the market. Some of the interesting features / updated capabilities being introducied in the new version include snapshots, SSD caching, VM host capability (a first in the SMB NAS market) and NFS v4.

The SSD caching (cache pools) feature automatically caches frequently accessed files on a pool of SSDs. RAID protection is also available for these cache pools. The new OS also brings Twonky Media Server v7 integrated for SOHO / home users. The most exciting feature is undoubtedly the IVX integrated virtualization technology which allows the px12 rackmount arrays to run multiple virtual machines (Linux or Windows) with their own private virtualized hardware. This feature is particularly helpful in situations where a lightweight Linux web server or a machine running non-intensive Windows services need to run in conjunction with a multi-bay high performance NAS. 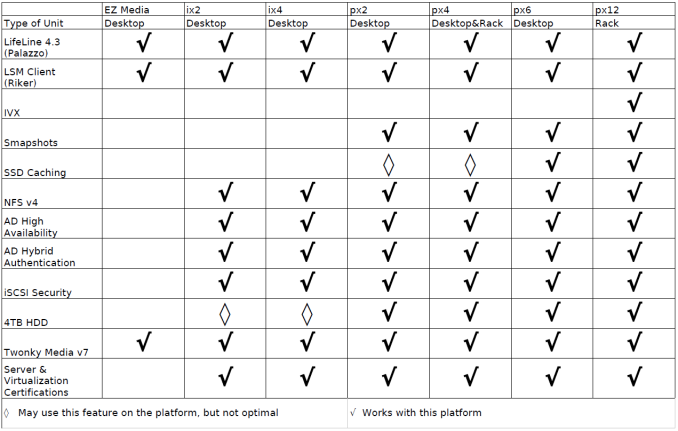 One of the main issues with LenovoEMC's LifeLine OS is the fact that many of the features are available only in the px series and not the ix ones. This time around, LenovoEMC has helpfully provided us with a feature matrix that we have reproduced above.

The update will be made available later this week for existing StorCenter owners and pre-installed NAS devices will launch in May. Hit the source link for more information on the new features in the newest version of LifeLine OS.