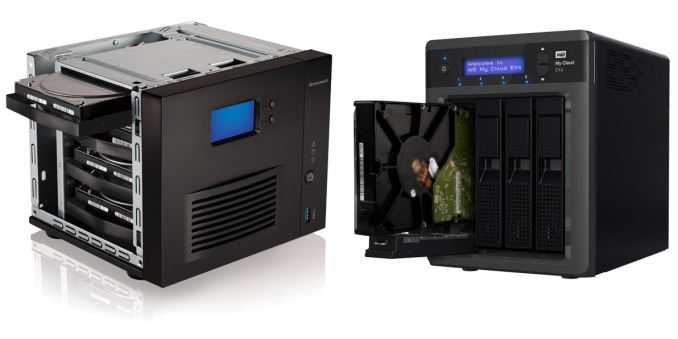 The consumer Network Attached Storage (NAS) market has seen tremendous growth over the past few years. As the amount of digital media generated by the average household increases, the standard 2-bay NAS is no longer sufficient. Today, we are going to take a look at two different 4-bay solutions, the Western Digital My Cloud EX4 and the LenovoEMC ix4-300d. Both of them use ARM-based Marvell SoC platforms and target the home consumer / SOHO markets.

Western Digital has had a lot of experience supplying SMB NAS units with more than 2-bays, but those have been based on Microsoft's Windows Storage Server. On the consumer side, their attempts with a custom Debian-based embedded Linux NAS system were very functional and cost effective. On the other hand, LenovoEMC (Iomega) has a long history of servicing various tiers in the NAS market, ranging from single-bay network attached hard disks to ARM-based SOHO targeted NAS units (the ix-series) and SMB / SME-targeted rackmount / tower form factor units (the px-series).

The two units that we are going to look at today were released a year apart, the LenovoEMC ix4-300d in late 2012, and the WD MyCloud EX4 in late 2013. One would definitely be excused for thinking that the ix4-300d would be based on an older platform and the WD EX4 on a more modern one. The interesting aspect is that the ix4-300d was one of the first NAS units to use Marvell's ARMADA XP platform. WD, on the other hand, has gone with the older Kirkwood platform to keep the costs low. The following table summarizes the features of the two NAS units that we are covering today.

Our NAS reviews use either SSDs or hard drives depending on the unit under test. While rackmounts and units equipped with 10GbE capabilities use SSDs, the others use hard drives. The ix4-300d and My Cloud EX4 were both evaluated with four 4 TB WD Re (WD4000FYYZ) drives. Evaluation of NAS performance under both single and multiple client scenarios was done using the SMB / SOHO NAS testbed we described earlier.