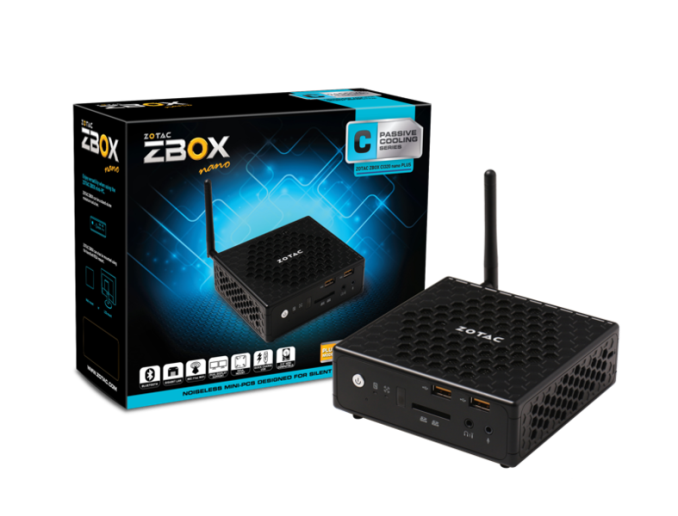 Over the last couple of years, mini-PCs in the ultra-compact form factor (UCFF) have emerged as one of the bright spots in the troubled PC market. Zotac is no stranger to this segment. In fact, their nano xs units came to the market before the Intel NUC, even though the NUC is credited with kickstarting the UCFF trend. Intel's Bay Trail family of SoCs has proved to be an affordable and low-power candidate for UCFF PC units. We have already evaluated a couple - the actively cooled GIGABYTE BXBT-1900 and and the fanless ECS LIVA.

Even though we were sampled the barebones version, we took the RAM and SSD from our ZBOX CA320 nano PLUS to get the system up and running. The CI320 nano PLUS is also one of the popular models from Zotac to come with Windows 8.1 Plus Bing - a Microsoft initiative to cut down on licensing costs for OEMs making certain types of computing devices. Bundled with a Windows 8.1 license, the CI320 nano PLUS costs less than $260. This is much cheaper than what one would pay for a Windows 8.1 license if they were to purchase the barebones unit (around $140) and the RAM / SSD separately. The specifications of our Zotac ZBOX CI320 nano review configuration are summarized in the table below.

Our Zotac ZBOX CI320 nano kit didn't come with any pre-installed OS, but it did have a CD and a read-only USB key containing the drivers. In any case, we ended up installing the latest drivers downloaded off Zotac's product support page. In addition to the main unit, the other components of the package include a 40 W (19V @ 2.1A) adapter, a US power cord, a VESA mount (along with the necessary screws), a single 2.4 GHz / 5 GHz antenna for the Wi-Fi feature, a driver CD / read-only USB key, user's manual and a quick-start guide. The gallery below takes us around the hardware in the unit.

In the table below, we have an overview of the various systems that we are comparing the Zotac ZBOX CI320 nano against. Note that they may not belong to the same market segment. The relevant configuration details of the machines are provided so that readers have an understanding of why some benchmark numbers are skewed for or against the Zotac ZBOX CI320 nano when we come to those sections.