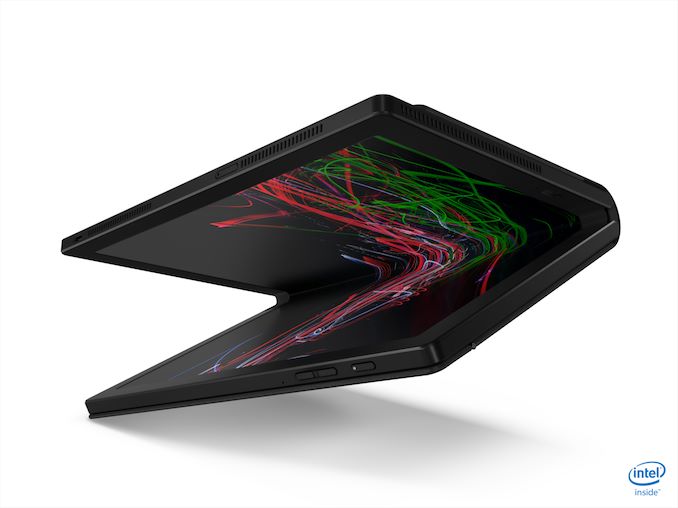 In 2019 we were exposed to the first foldable display smartphones and wearables, with the Samsung Galaxy Fold, Huawei Mate X, and Xiaomi Mi Mix all demonstrating various themes of a foldable display in a hand-held device. Two of the main concerns with those devices is longevity of a display opened 50+ times a day, and durability if the display is on the outside. Clamshell Notebooks arguably don’t have those restrictions, so it makes sense to bring the technology to something more for business use (especially with the costs). Enter Lenovo’s ThinkPad X1 Fold. 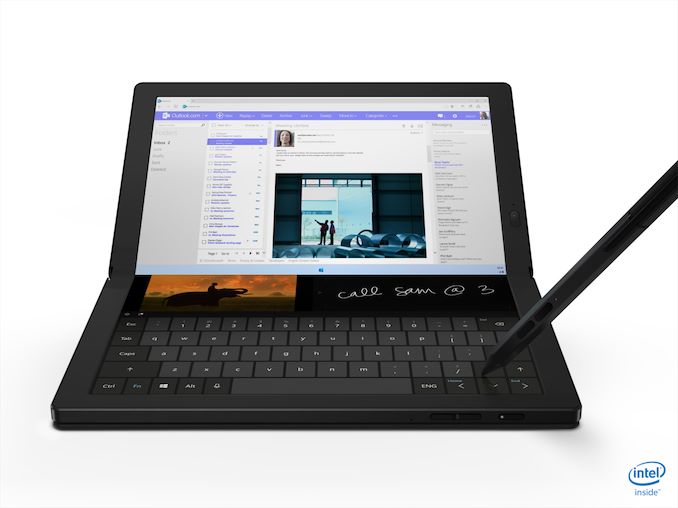 Now let’s start my saying Lenovo does have experience with foldable displays. In late 2019 the company, under its Motorola brand, demoed the new Moto Razr, with a foldable display. Combined with the smartphone hardware inside, it will have a recommended price of $1500. The concept for the new Thinkpad X1 Fold is similar to that of the new Moto Razr – keep the display inside the fold. 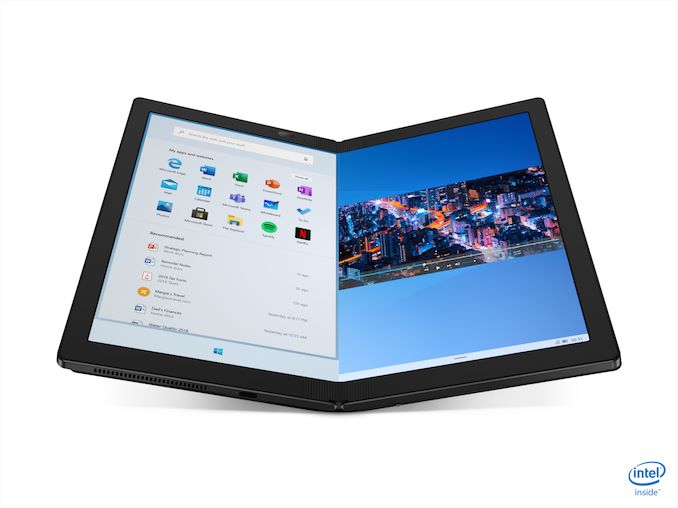 The new Fold is a true high-end Thinkpad, with a flexible 13.3-inch OLED display split across the two halves of the design, essentially becoming the size of a notepad when folded. This means that when unfolded, it offers 2x more screen real estate than a Samsung foldable smartphone. The construction of the foldable display includes metal frames and supports combined with carbon fiber plates. The hinge mechanism claims to provide friction free folding, but also allows for rigid support at a variety of angles when unfolded like a standard clamshell. 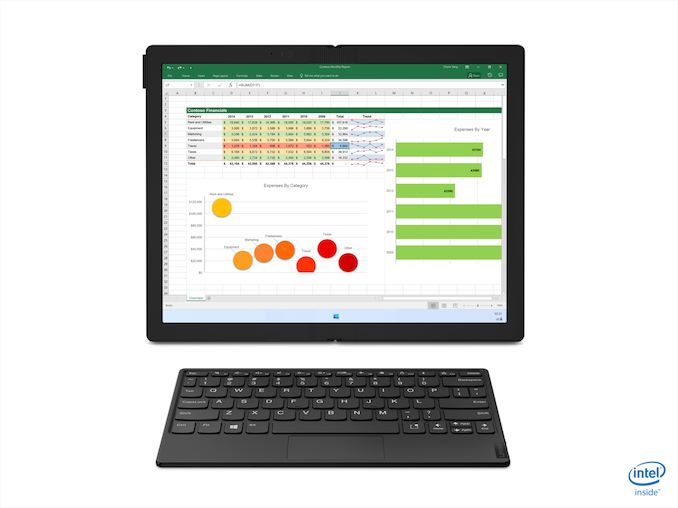 When folded, the device is just over an inch thick (27.8 mm) at its widest point, but when unfolded becomes only 7.8 mm thick, or 11.5 mm with the included cover. The reason that the folded dimension is more than 2x the unfolded is because there will be a slight ridge on the hinge where the fold is, so the display isn’t crisply folded.

Inside the unit beats the heart of a properly built laptop. We’ve got one of the first new outings for Intel’s Lakefield processor, featuring 1 big Sunny Cove core and 4 smaller Tremont Atom cores, combined with Intel’s Gen11 HD Graphics (the ones that come with Ice Lake, although it doesn’t mention frequencies or EUs). Memory is a full 8 GB of LPDDR4X-2133 with storage provided by a standard M.2 2242 NVMe drive, although Lenovo will offer variants up to 1 TB. There’s an inbuilt 5 MP camera, and the battery is a proper 50 Wh, good for 11+ hours according to Lenovo. 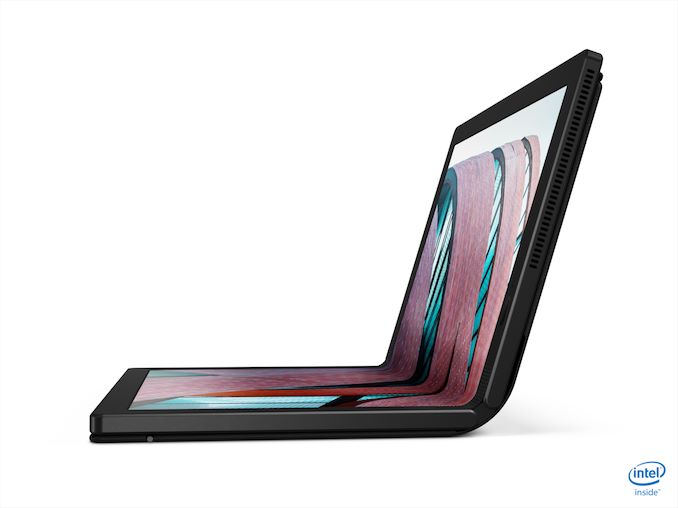 The exact specifications on the display is a 13.3-inch flexible OLED with a 2048x1536 resolution, with brightness up to 300 nits and color gamut support up to 95% of DCI-P3. Touch is also implemented.

For IO, the device has two USB Type-C ports (one USB 3.1, one USB 3.2), and a Displayport over Type-C port for external displays. There is also a SIM slot in order to use the onboard modem. Lenovo lists the modem as 4G/5G, although doesn’t state which modem this is – it’s likely to be Qualcomm’s X55 at this point. The device also supports 802.11ax and BT5.0.

The price according to Lenovo is $2499 for the 1 TB model. All units will come with an Active Pen and an external keyboard in the box, and altogether the unit weighs 999g / 2.2 lbs (cover included). The keyboard can be off the notebook, or placed on one half of the screen: 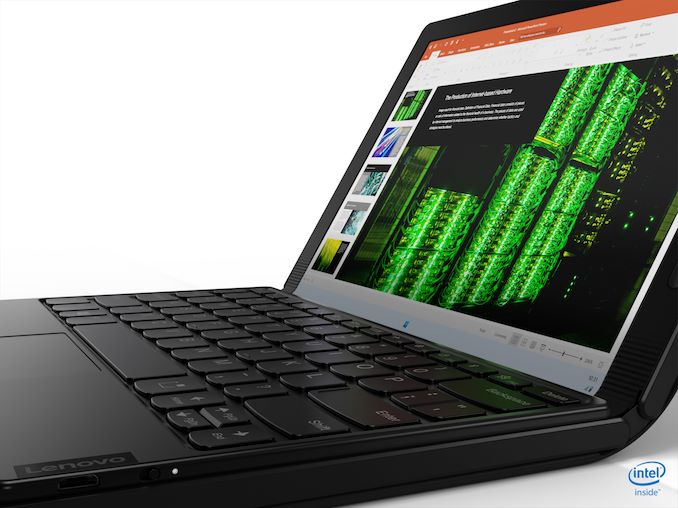 The Lenovo ThinkPad X1 Fold looks like a crazy device that I’d love to test. Lenovo has a tentative date of ‘Mid 2020’ for the product, which will likely depend on display availability as well as Intel’s production of Lakefield processors. When Lakefield processors were being made, I theorized that this is the sort of device it would go into (albeit I didn’t guess it would be a foldable display). Bearing the ThinkPad name means that Lenovo is aiming dead square for the commercial market with this one.